If my trekking poles were to break, I wouldn’t replace them. I would leave them behind. This was the unpopular answer to a question about using trekking poles on my upcoming thru hike. Unpopular because a whole lot of people seem to be absolutely enamored by the aluminum or carbon walking sticks that tie up their hands while they walk. Why? I know why, I’m just not yet sure I myself care.

The more I got to thinking about this subject, the less I want to use them. Not only that but the less I remember using them during the past 2 years of hiking. When you see photos of me, I often have them in hand but it’s a farce. If you’ve actually hiked with me, I am almost always just carrying them! Not often, actually using them.

Not to mention I’m constantly forgetting them places. These are some expensive ass sticks to be forgetting! I guess I’m so far removed from being wed to them that regardless of the retarded price tag, I still can’t remember to put them in my car after a trip. So if you’re ever at a trail head, and find 180 dollars laying on the ground, that’s mine, I can pick it up from you whenever.

So why am I such a hater? Maybe I can point out some pros, why I don’t care, and some cons. I will say I was totally going to carry them on my ECT thru hike, and then someone unknowingly made me rethink that decision! Now, I’m unsure if I’ll be starting with them anymore. One trekking pole? Two trekking poles? None? The use of them is obvious is certain situations, but they aren’t so necessary in every situation! Just another burden to be carried.

So why do people like trekking poles so much anyhow? Is it simply to look like some 4 legged spider human, cruising up and down mountains? Although an appealing look, I gather there’s much more to this.

When I cut the hipbelt off of my backpack, if I had asked the opinions of some of my hiking friends prior about that decision, I certainly would have been flamed. Look at me now, I love the freedom of not having a hipbelt, and frankly I feel I’m missing nothing. This only works because I carry so very little weight on my back. My baseweight (all the contents of my backpack not counting food or water) for summer hiking has been 5 pounds and under. Now my thru hike approaches and I’ll be starting out with something in the 6 and a half pound range. Much like the hipbelt, I think trekking poles are more useful to those who have heavier loads. Those who may need more support. As folks shave weight from their pack, and reach lower baseweights, they may discover that trekking poles are no longer a necessity. Although this is obviously still very much a personal preference thing.

Back when I carried a heavy pack, hiking poles were a true gift. As my pack got smaller, it seems like naturally I just stopped carrying them, stopped using them, or maybe stopped needing them. For those who may be a little unstable under the weight of their pack, or who are looking for extra knee support. The poles truly are worth every ounce, and then some. 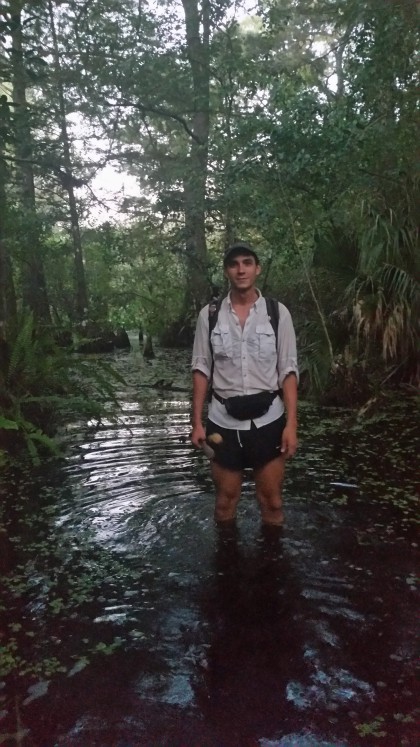 Here I thought they would help me navigate the swamp, really they just got in my way. As seen in my hand, where they stayed just like that.

I’m young, I’m fit, and my pack is really light. What are trekking poles supposed to be doing for me? Aside from the obvious answers some simply say, “they make you go faster.” Which is funny, because people already tell me I’m going too fast! Apparently, I could be going faster even. Less time on my feet during the day is appealing, but personally I don’t particularly see this as much of a positive virtue of using poles. I’ve argued this before but I think your body wants to go at one speed. By propelling it faster and further than its internal pace dictates aren’t you potentially opening yourself up to injury? Maybe not. It’s just a thought. Although I will not argue that poles can save your knees on downhills, but I will argue that for someone in my situation I may not need that. I don’t already have any knee pain while I hike, and aside from a short recovery period from a running injury, my ankles have never caused me problems either. So for me, maybe they aren’t worth the weight.

Or maybe the hassle. On a hike that’s going to last upwards of 5 to 6 months, things are going to break. Obviously for the sake of your wallet, and sanity, hopefully nothing breaks! In a perfect world… one pair of Altra’s would last me 5,000 miles. Alas, I’ll be replacing my shoes at least 6 times. Other folks often have to replace not just shoes, but backpacks, inflatable sleeping pads, pillows, and… you guessed it, trekking poles. A friend told me that one of his buddies on the AT snapped his poles twice, and another friend broke them 3 times! No wonder so very many people go to Leki, maybe it’s not because they’re amazing poles. They are blinded by the warranty. (Another company comes to mind for the same reason.) How about I avoid this all together, and not use any.

Poles may be smart but I’m just not convinced that they’re for me. I have 4 more months to decide before I fly to Canada to begin my long walk home.

There’s a small group of hikers that choose to go stick-less, some of these hikers being among the best in the world. Joe Kisner, Scott Williamson, Lint, Francis Tapon… to name a few. Just something to think about. The question arrises, if they do it why not I? I had the same question about thru hiking in general. Rarely if ever do you hear about a seasoned thru hiker getting off trail to quit, yet at the same time you hear numbers like so many people quit within the first so many miles of this trail. It begs the question, why can these hikers do this year after year, flawlessly, when so many others quit? Hmmmmm. Maybe these top hikers are the ones we should learn from(exclusively) instead of Joeschmoe on youtube. Although a dangerous game, I think for the most part they set a wonderful example. More of them use poles than not, but then again that group who goes without does just as well.

Now I’m not saying hiking without poles is the answer to all of lifes problems(on the trail) as they are a godsend to most, but the more I have thought about it the less I want to carry mine. Try it sometime yourself, it’s liberating. Bring oranges to peal while you walk. Might as well.

“I’m not arguing that people should ditch their trekking poles or any other piece of gear. Hike your own hike. Many backpackers couldn’t hike at all without trekking poles, so it’s wonderful that they exist. I’ve made some comments about trekking poles because they are an easy target and many people don’t fully consider the implications of carrying them.

Also, I’m not so sure that most new hikers have even tried hiking without poles. They go to an outfitter who convinces them that they will be miserable without poles. And that’s probably true, because most backpackers start off with massive loads that are hard to carry without poles. However, soon they lighten up, but then they forget to ditch the poles along with the other useless gear they tossed. I’ve known some backpackers who have revisited the idea of hiking pole-less and they’re surprised that it’s as easy as… walking! I prefer having my hands free, but someday I may use them because I can see their utility.”

– Francis Tapon, triple crowner and the first person to yo-yo the CDT

Sometimes two are nice, sometimes one, other times none.